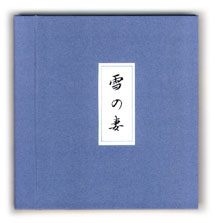 Back in 1990 a small-publisher friend suggested that I join him in a book project. He had a Japanese story that had been translated by his daughter's father in law in England, and he wanted to make a little edition of it. We decided to make an artist's proof edition of three books handbound, and see where that went.

I set about studying Hokusai paintings and blocking out the book. After more than a year's spare time, the project was finished. The type was put on electrostatically then the pages were run through the heat rollers of an omnichrom machine to fuse them permanently. Brush paintings with airbrush on every spread in light blue, on stiffened Hoshu paper. There was gold calligraphy on transparent magnolia paper wisping over the title page. It came out beautifully. One went to England, Gene got one, and one was for me.

One day when I was showing a class a bunch of stuff, several pieces were taken or left behind. Among them was the little Snow Wife book. It was lost. I couldn't even tell Gene till years later, pretty sad, but these things happen. I lost any enthusiasm I had for continuing the project.

The day before yesterday I got rear-ended on the Long Island Expressway, the car was ruined, but I'm ok I guess. It was a rental car, so I just had to go to Hertz and get another one. The guy who hit me left the scene, but then decided to come back when he realized that his bumper had fallen off with his license plate on it. By that time the cops were there.

Anyway -- I had to look for our marriage license to fax to Hertz to prove I'm married to Cathy, since she rented the car and I was driving, and our names are different. Looking for the license, I found my long-lost handmade book in a manilla envelope! It's been quite a week.

back to Ed's page